Dear all, I will not be with you today. I am in Freetown. I have spent the past few weeks busy creating and preparing opportunities to speak about my doctoral research on civil society and disability in Sierra Leone. The research is finished, the dissertation is written and defended, all what left is to explain members of civil society and those of the disability movement here what the outcomes of the research are, how I think they can use these to make their claims stronger and also to thank them for their contributions to my PhD degree. 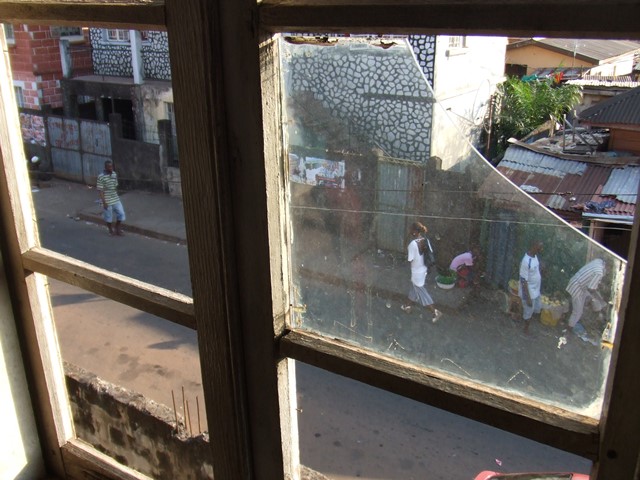 It seems everything is in place now, although I am always prepared for surprises. Bad or good ones - alike. If everything goes according to plans, next Monday I am invited to give a short speech at the special Symposium held by the Disability Commission for the occasion of the International Disability Day (to be celebrated on the 3rd of December). On Tuesday and Wednesday I organise a two-day workshop for members and leaders of disabled organisations on disability activism. On Friday I am going to present the summary of my research to Handicap International, an important international NGO which hosted me in the first phase of my field-work.

It would be quite pretentious to think that these little interventions will change anything in the world. It is not only pretentious but possibly also a bit outdated to think that an anthropological research is not only about documenting but also about informing and influencing – the subjects of the research, the interested public, and even maybe politicians and decision makers. These ideas are outdated in a world in which social sciences in general and cultural anthropology in particular are stigmatized once again either as dangerously subversive or as childish pastime for idle students not smart enough to do something more useful.

Some of us resist, maintaining that anthropology is not only one of the most beautiful sciences, paying tribute to everything human, but also probably one of the most useful ones in times when intolerance, fundamentalism and fear of the other is spreading like wildfire putting in serious danger the whole humankind. I owe a lot to the anthropology department where I was trained. I really would have liked to be there to celebrate its past 25 years. However, I believe, there is a certain symbolic beauty in the fact that I am in Freetown right now, trying hard to do anthropology in a way that brings change. This is what that first department was about. Luis Boglar, its founder and leader believed in the transformative power of anthropology. He wanted to train a new generation of anthropologists being able to bring the spirit of anthropology - the respect of cultural diversity and solidarity with the weaker - not only into academia but also into education, social work, journalism, political sciences and politics itself. He wanted to see “commandos of tolerance” rise from our department. Buci – as we called him – was a visionnaire. He probably knew that the need to uphold, preserve and strengthen these values would be increasing as the new millenary goes by. I would like to imagine that today he would be pleased to see that the tradition of engaged anthropology lives on, in the work of individual students, but also in that of certain civil society organisations which some of the students have created. I am lucky to be one of these students and proud not only of being an anthropologist but also one of the founders of Artemisszio, which I believe the first Hungarian NGO, explicitly undertaking the task of translating anthropology into practical work aiming to change public perception about cultural diversity, promoting tolerance and defending the interests of disadvantaged groups.

When we created Artemisszio the non-governmental sector in Hungary was as new as anthropology itself. The existence of new social science departments and NGOs were signs of a new area, in which – we hoped - human values would be more important than in the epoch that was behind us. After socialism entering a new world ruled by liberal democracy, human rights and civil society seemed to be engaging on a bright path full of promises. We felt like we were the avant-garde. If today we judge our past performance on our ability to make society a better place for all, less unjust and more respectful of cultural, religious and ethnic difference, there is hardly any other verdict possible: we failed. But I would like to turn it otherwise: it is not we who failed, rather we were betrayed by the promises of the transformation and it is only now that we can see that the initial path was much less bright and straight that we used to think. It certainly does not mean that it was not worth taking it. Whatever is the case, here we are, anthropologists and activists and we are still training and forming new generations of anthropologists and activists. What was done cannot be undone. The spirit of anthropology is released and not ready to go back to the bottle. Thank you Buci.