Being a migrant at the Kazinczy Living Library 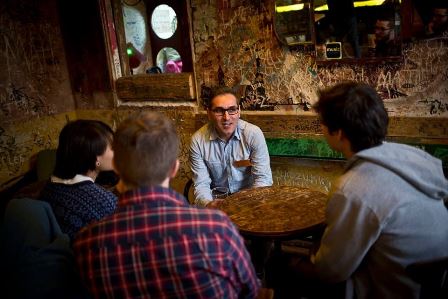 I believe any effort and idea which helps people get closer in order to know each other’s differences and concerns or common features could be a small step towards the integration process which I personally assume, could leads up to uplift the human consciousness and result in to less conflicts and universal peace.

Imagine with this introduction, when Erna, one of the mentors in Artemisszó asked me to join the Kazinczy Living Library as a book, I accepted it with pleasure. The whole idea was exactly fitted to my beliefs. I thought it would be the best opportunity for me to introduce my thoughts and my culture to public as an Iranian person who lives here in Budapest and also It would be the best chance for me to do my share, although small share, to help spreading their ideas through me.

A week before the due date, we had a meeting with other books and volunteers to get to know each other and made strong team to get ready to let the readers read us on 7th of March. It was amazing and exciting crowded day. We had not had enough books to offer to readers and they were writing their name in waiting list. An Indian solo traveler, a Hungarian-Roman lady, a group of Hungarian university students, German soldier and German Erasmus student with his girlfriend from Hong Kong, a group of French girl, polish guy and Greek-Hungarian girl, and a big mixed aged group of Hungarian who some of them planning to travel to Iran were my readers. It was best feeling to see their curiosity and sharing my background, the cultural differences and difficulties as an immigrant. The best part was when I was seeing them leaving me with a big smile on their face and probably a small change in their mind and thoughts about immigrants and immigration

That Saturday was unique and amazing experience for me and reminded me again that the only reason which we are sometimes close and afraid each other is because we don’t have a proper channel to communicate and know each other’s background and concerns. Thank to Kazinczy Living Library project (especially Ásmány Lívia and Bence Molnar for their hard work) to start opening the channel.