Motherhood in an intercultural perspective

"It is only in the act of nursing that a woman realizes her motherhood in visible and tangible fashion; it is a joy of every moment."

Motherhood is the greatest gift, God gave to womankind, to know that we are instruments in God’s Creation, to know that we participated in God’s purpose and plan. Motherhood is life, and hopes, and dreams; it is failures and disappointments, repentance and forgiveness. In every healthy society domesticity and maternity are considered for a woman as an eventual obsession, although in many modernised society conception of woman’s life and her identity in terms of the traditional conflict between family and career is in question. Every woman in her life may struggle with the idea that “should marry and have a parcel of kids or have pleasure” (Plath, 1963). Most of the artist women, writer and poet have been confronted with an inner contradiction regarding making a selection between her maternal duties and following her artistic aspiration.While other women get immense pleasure from the simple task of doing the laundry or reveling in the blossoming of new lives within their wombs, or the tingling of breastfeeding a child, these very responsibilities which mark her feminine identity and legitimize her womanhood become the source of her anguish and mental torture because she has abandoned them to find her own identity. She is desperate and doubtful of her dilemma choosing between her career and domesticity. 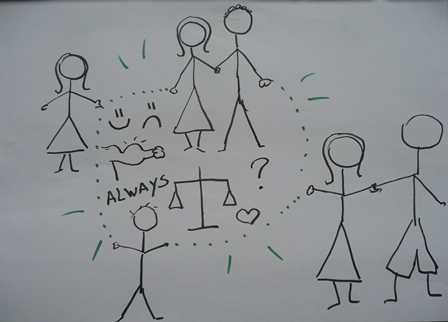 The program which has been held in Artemisszio on Wednesday 25TH June tried to illustrate maternity and the issues related to motherhood in different parts of the world particularly where the members of the group were belonged to. The discussion held by the numbers of the group and three invited experts in different areas of child bearing in Hungary.

At first each member of the group was asked to illustrate a picture of a family which has been recognized as an ordinary family in their ethnic and country. Each member depends on where they had come from drew the picture of a family and their members. To compare the variety of the pictures, the models were set on the wall so that everybody could see other ones. The family pictured in those papers were quite similar in having a mother, father and children. The pictures indicated beautifully the fact that the extended family in the traditional culture are more common than the modernized-societies where the family decrease their numbers to a man and a woman and a child. To describe the hidden idea of each sheet, members were asked to talk about their picture personally. Everybody explained the family shape and family role of their own countries.

In the next part of the program a video which was a part of a long movie about child bearing was shown which indicated the moment before and after child delivering. The video showed the moments of child delivering in four parts of the world starting by woman from Ghana, then Mongolia and changing the plat to delivery of a woman in Japan and United State. Although the differentiation between the way in which women proceed their magic duty was significant, the way each woman showed her strong willing to be a real mother was extremely unique. The baby was taken to her mother to be fed with her breast and to get her warmth feeling her strong desire of motherhood, the very pleasant moment for any woman to experience. Forough Farrokhzad -an Iranian woman poet (1935 -1967) - whose poems are considered as a true voice of a woman struggling with motherhood and career envies such a women says:

What peak, what heights?

“Give me sanctuary, o you simple perfect woman;

And in whose opened blouses, the air

Forever mingles with the scent of fresh milk.

In other part of the assembly the attendances were asked to point the prominent stages of life a baby or a woman. Every country made some signs on the provided sheet to introduce the most important days and steps of a life for a new born from their birth till their fertility time or more. For instance, child bearing was one of the identical point where each country believed as most prominent time of the every woman’s life. To illuminate the concept of child bearing in Hungary three ladies have been invited to explain the stages and steps where motherhood takes place. They talked in Hungarian and their words were translated by the event organizers.

Maternity is considered as a very predominant aspect of women’s life in every society. To show how demand of being a mother is challenging, I cite a stanza of a poem of Sylvia Plath - an American woman poet - which describes the mother–infant relationship as follows:

Cries out, for the mother’s dug

The stanza reveals the baby as a symbol of nature that has entrapped and consumed the woman. The poem suggests that the baby’s mother is trapped in the hold of an imaginary state, as the yet unborn baby who needs her to renew her life giving unstable potential for the very sake of the baby’s life. Hence the glory of motherhood cannot be valued.