Victims, culprits or resisters? Chances of resistance beyond the global periphery and closer to us 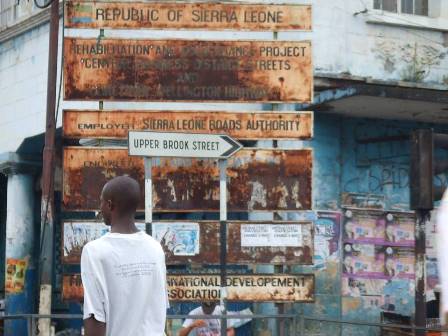 by Maya Christensen, Mats Utas and Christian Vium, 40’ in English and Krio, with English subtitle

What are the prospects for the young and poor in African cities? This documentary, entitled Jew Man Business is filmed in Freetown, the capital of one of the world’s poorest countries, Sierra Leone. Here the urban surroundings afford ex-combatants relative anonymity and create economic opportunities.

Denis Ramos and Diana Szanto, 52’, in English and Krio, with Hungarian subtitle

Since the end of the civil war in 2002, Sierra Leone has gone through an apparently successful democratisation process, guided by international organisations. The film shows how development looks like from bellow, from the perspective of the poor.

After the films discussion with:

Sierra Leone is one of the world’s poorest places. It is a small country in West Africa. Between 1991 and 2002 it was ravaged by a brutal civil war triggered by inequalities, poverty and absence of the state. After the war disabled beggars, street vendors and ex-combatants try to survive in the streets of Freetown, the capital. They are connected by the conviction that they have the right to a better life.