Hike in the Buda hills

On August 2, 2014 we went on a hike with participants in our project titled "Not the weaker". The tour was led by one of the participants, Yazel. We started out in Budakeszi and arrived at Nagykovácsi. In the meantime, we passed by the highest point of the Buda mountains, Nagy-Kopasz. When we got back to Hűvösvölgy, we took the children's train. 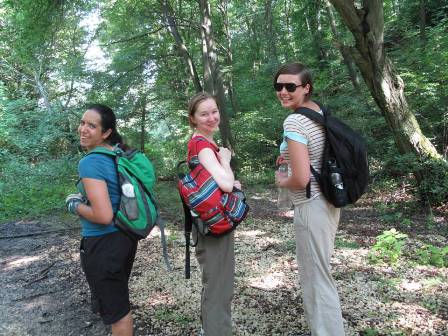 For the hike we met at Széna Ter where we took a bus that took us to Budakeszi, leaving us at the “Erszsébet (Hidegvölgyi) erdészlak” bus stop.

A few steps next to the bus stop it was our starting point. We started with a lot of smiles, pictures and energy, it seems that from the beginning it was already a quiet and inviting place right outside the city.

For the first few km we hiked with a slight uphill through the forest, following the green triangle sign. This part, quite covered by trees was a relief for the effort and warm weather. Then we reached a clearing where we stopped for a short rest and some fuel (food and water) while enjoying the beautiful panorama.

Some minutes later we continued our way to our objective: the 32m panoramic tower (Csergezán Pál-kilátó) and the highest point of the Buda hills, the “Nagy-Kopasz” at 559m. So, roughly from our starting point to the tower we walked about 3.6km in ~1:30h.

Once next to the tower, we enjoyed a well deserved break that we spent in a couple of tree covered wood benches. We chatted, played and got some more food and liquids. Afterward, we climbed up the tower where we took a look at the panorama. Fortunately there were useful signs that showed us the direction towards other cities or spots from the Buda hills.

We then restarted our walk: leaving behind the tower we continued in the “green triangle” path, this time downhill, still was a fairly covered path, sometimes wet and muddy, probably because it rained in the previous days. At some crossing point we walked for a minute in the wrong direction but we quickly realized the mistake and came back to the original path, all the way until crossing the “green stripe” sign that would lead us to Nagykovácsi.

The last km or so until town we walked on an open dirt road that reminded us that it was a quite warm day. It is also worth mentioning that during the hike we barely came across people, which made the trip quite pleasant.

Once reaching a paved street, the hike was over, we were in town and just a few blocks away we found the main road and a coffee house were we took a rest and ate ice cream and dank either coffee or lemonade. All refreshed we took a bus to Hűvösvölgy were we then took the Children's Railway, a train run by children with adult supervision. The train took us through a beautiful part of the Buda hills and very well known spots, such as the base of János-hegy. We descended in Normafa, where our trip came to an end.

So, after a long warm day I believe all the effort was worth it, we got to enjoy the nature and hopefully everyone keep this day as a good memory.